Very encouraging projections about global air cargo/air freight projected volumes reaches us from the very important forecast by the International Air Transport Association. IATA's data is one of the finest sets of indicators within the industry and these four year projections released in the last week are a signal that the global recovery for air freight is in full swing.

According to the analysis, growth of 4.1% annually should be seen through until 2018, numbers that would far exceed what has been experienced during the last three year. As ever there is a caveat to such a robust forecast with reminders that economic stability could seriously alter such predictions. The global economy remains finely balanced and at the mercy to a certain extent of trade agreements and protections, oil prices and international stability relating to geopolitical concerns which remain fragile and stretched in many regions.

Competition is another important factor with the air cargo industry continuing to see some loss of market share to container lines as shippers sought savings via ocean freight. Not such a large factor in the North American market where we operate of course but nevertheless a fluid situation that reinforces the importance of air cargo deadlines being met for all shipments to provide and reinforce the advantage that our industry holds.

Regionally, per the IATA projections the Middle East will see the most rapid expansion through 2018 (4.7% growth) with Iran (7%) and India (6.8%) the fastest growing national markets. Meanwhile at home the North American market is forecast to see 2.8% growth over the four years, a figure that is essentially on par with Europe. This long-term projection sees the US continue to lead the world with totals of international freight reaching some 10.1 million tons by 2018. According to the report approximately 35 percent of the world's trade value will be shipped by air in 2014. 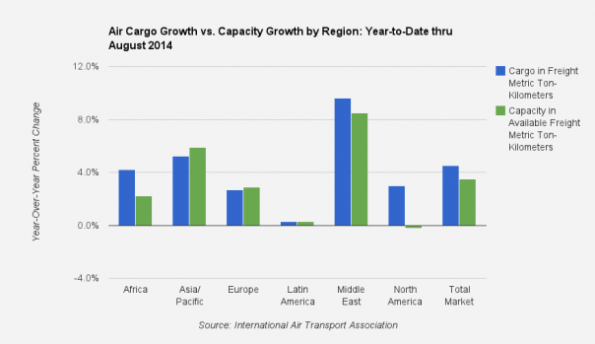 Also rather interesting to see the data above that shows the growth by region of air cargo tonnage and air cargo capacity in each part of the world. You'll note that air freight capacity in North America remains flat versus other markets which could begin to change over the next few years if the increased volumes that are being predicted materialize in due course.